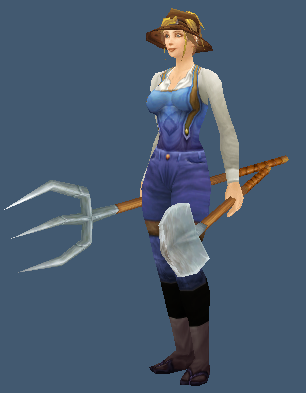 This is a great farmgirl costume, or farmboy on a male toon for RP’ers.

The pitchforks are polearms, and are also two other pitchforks in the game, but neither are currently obtainable, but you might find them on the AH.  The Pitchfork of Madness (a rare level item, so also transmogrify-able) and the Pitchfork.

The Shoveler is a two-handed also, a mace.  There is also a one-handed mace version, Shovel of Mercy, that is a horde quest reward for Do the Right Thing.

The Studded hat is available from many vendors and shares the same model as numerous other hats in the game.

The shirt and overalls are both crafted by tailors.

This entry was posted in Roleplay Fun & Holidays and tagged farmer, roleplay, RP. Bookmark the permalink.